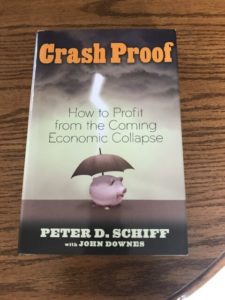 Let me tell you why, even though I don’t necessarily enjoy camping or relish the outdoors, I am actively working toward improving my self-reliance skills.In 2007, I was at the library and I saw a book that caught my eye. The book was titled Crash Proof: How to Profit From the Coming Economic Collapse, and the author was Peter D. Schiff.As a sports writer and business writer for most of my professional life, I never had much interest in economics or financial concepts. However, I found this book to be fascinating, mainly because I discovered that the United States economy was basically a “house of cards” just waiting to fall down.

The reason I believed this was because I’m also a big believer in “action-and-consequence ideology.” In other words, I firmly believe that actions (and inactions) have consequences, and even if you manage to delay the consequences for a certain amount of time, it’s impossible to delay them forever.

After reading Crash Proof, I came to the realization that the United States government had created consequences for itself—and for every U.S. citizen—and there was no way to delay those consequences forever.  So I told my boss. And my boss’s boss. Fortunately, they believed me, because in a very short time, the Great Recession began in this country.So you might point to the Great Recession and say, “See, there are the consequences. We already suffered them. So there’s no need to think there are any more consequences.”

That, unfortunately, is NOT the case.

After reading Crash Proof, I read every finance-related book I could get my hands on. Some were dry and boring. Others were as fascinating as Schiff’s book. After reading them, I came to a rather sobering conclusion:The Great Recession did not, in fact, represent the consequences of our country’s ill-advised financial behavior. Instead, it represented a further delay of the real consequences.So what will those real consequences be? More than likely, they will include an actual depression in the United States of America. Not a recession. Not even a second Great Recession. An actual depression.

And once it starts . . . predicting what will happen after that is almost impossible.