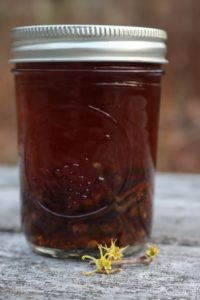 Witch Hazel Extract is known for its antimicrobial and astringent properties, and it’s been used for centuries as a natural disinfectant and wound cleanser.  Learn how to make your own witch hazel extract in a few easy steps.

Witch hazel extract can be found at just about any health food store or natural foods coop, and it’s pretty common in everyday grocery stores and drug stores too.

The problem is, the pre-packaged witch hazel extract available in stores has very little actual witch hazel inside.  It’s almost all alcohol, which is also a disinfectant, but if you wanted a bottle of isopropyl alcohol you could easily buy it for 1/10th the price.

Why buy it, when you can just make it?

Learning to make witch hazel extract means you always have the knowledge to craft your own natural herbal anti-microbial cleanser, whether you’re deep in the backwoods or simply crafting in your kitchen. 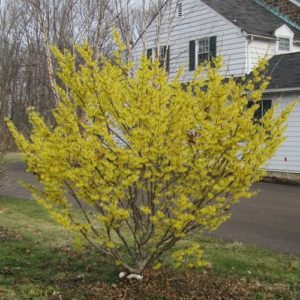 WHAT IS WITCH HAZEL?

American Witch Hazel (Hamamelis virginiana) is a really unique shrub native that can be found all across the eastern half of North America.  It’s a perennial bush that grows no more than a few meters tall, and has many stems originating from the roots.

Wild witch hazel can be found near streams, ditches, and wet lowlands, but it’s also commonly cultivated as an ornamental.  The unique blooms look like streamers bursting out of the central blossom, and showy varieties have been bred to almost look like pompoms.

Witch Hazel blooms in the late fall, long after everything else has gone dormant.  In the Northeast blossoms appear around thanksgiving and persist until mid-December.  The first frost is usually sometime in September, and we often have snow on the ground by October. A related species, Ozark Witch Hazel (Hamamelis vernalis) grows further south and actually blooms mid-winter.  If you can positively identify witch hazel in the wild, the best time to harvest is actually during bloom or right after, as that’s when the medicinal constituents are the most concentrated in the plant tissues.

Other sources that say it’s best to harvest during spring when it’s just breaking bud and sap is running, so clearly there’s some disagreement on this based on the source you check.  Regardless of the “best” time, it can be harvested year-round. 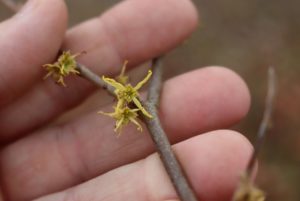 When using leaves, witch hazel extract is made as a gentle infusion (like making tea).  For bark and twigs, they’re simmered for 20-30 minutes to make the extract.

These days, witch hazel extract is almost always used externally because what’s sold is a weak steam distillation of the twigs preserved with isopropyl alcohol.  It’s not meant for consumption, it’s meant for use as a topical disinfectant and anti-inflammatory.

Most often you’ll see it recommended as an acne treatment, cleaning wounds, or as a cooling anti-inflammatory pad for treating hemorrhoids.

Historically, a water extract of witch hazel was made fresh and used both internally and externally.  According to Chestnut School of Herbs…

“Native Americans have long used the twigs and bark of witch hazel as a medicinal herb, both internally and topically, for a wide variety of ailments. The tea is taken to remedy sore throats, diarrhea, intestinal bleeding, colds, coughs, bruising, and to prevent postpartum hemorrhaging.

The tannins in witch hazel help lessen the inflammation of mucous membranes in sinus congestion from allergies, sinus infections, and head colds.  These same astringent tannins are also helpful for conditions related to the mouth: bleeding gums, gingivitis, and other infections.”

HOW TO MAKE WITCH HAZEL EXTRACT

Making witch hazel extract is pretty simple.  Start with about a tablespoon of witch hazel bark in a cup of water.

Commercial witch hazel bark is finely chopped so it’ll pack neatly into a tablespoon.  A 1/4 cup of fresh twigs will amount to roughly the same amount.

Bring the water and bark to a simmer and gently cook for about 20-30 minutes.  The volume will reduce by about half, and you’ll have roughly 1/2 cup of witch hazel extract after you filter the plant material.

While it’s simmering, your house will smell a bit like a hospital.  The scent isn’t unpleasant, but it just smells strongly antiseptic, like an operating room after sterilization.  If using leaves, use the same ratio, 1 tablespoon chopped leaves to a cup of water, but make an infusion by steeping the leaves for around 20 minutes.

This fresh witch hazel extract is now ready for use.  Since it’s not preserved with alcohol, it’ll spoil quickly.  Removing as much plant material as possible will help it keep longer, but in the best of cases, it’s still should be kept in the refrigerator and used within a week.

If you’d like to make a shelf-stable witch hazel extract, you’ll need to add alcohol.  A high proof vodka, whisky, or rum works well.  (Isopropyl alcohol will also work, but then it’s not for internal use.)

I don’t happen to have any immediate use for witch hazel, so that’s what I did.  I now have a half-pint mason jar with shelf-stable witch hazel extract ready to go if needed anytime in the next year.

Since witch hazel is sometimes made as a tincture instead of a water extract, I’m going to do a double extraction here.  I’ve added the alcohol and I’ll leave the plant material in for a week or two before filtering.  After that, I’ll top off the jar with a bit more 100 proof alcohol just to be sure it stays above 25% ABV.

This isn’t the “traditional” method, and usually the plant material would be filtered before alcohol is added to stabilize the witch hazel extract.