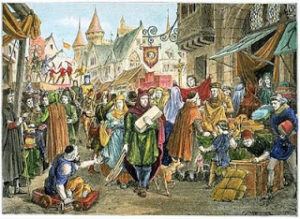 Scarborough is a small town on the coast of England. The “Scarborough Fair” was a popular gathering in Medieval times, attracting traders and entertainers from all over the country. The fair lasted 45 days and started every August 15th. In the 1600s, mineral waters were found in Scarborough and it became a resort town. Today, Scarborough is a quiet town with a rich history. We’ve all heard the song and may of wondered do the herbs Parsley, Sage, Rosemary and Thyme have any more significance other than they match the cadence of the song? The answer is “yes!  Herbs were much more than seasonings for food in medieval times and it is an interesting journey back to the time when knights and fair ladies lived, to find the answers.

“Are you going to Scarborough Fair
Parsley, Sage, Rosemary and Thyme
Remember me to one who lives there
She once was a true love of mine”

Here is a little history …
Scarborough Faire was an actual agricultural and craftstman fair, which originated in Medieval England in the mid 1200’s. Merchants from all over Europe, Scandinavia and the Byzantine Empire traded and sold their goods at the 45-day event. Just as in modern times, there were food vendors, entertainment and curious pleasure-seekers. Fairs and harvest celebrations are a part of every culture and are as much a part of modern life as they were at the dawn of recorded history. Our singer is asking a friend who is attending the fair to seek out a girl who he was once romantically involved with and let her know he still has feelings for her.

These plants weren’t chosen by the songwriter just because they rhyme well and have a pleasing cadence in the song, they have specific meanings that tell a deeper story than what is on the surface. This was a time when flowers and herbs were significant in the lives of medieval folk and they believed that they contained mystical properties that could influence emotions and feelings.

Many people view Parsley (Petroselinum crispum) as that sprig of green at the side of their plate when served a meal in a restaurant. Historically, parsley was thought to aid digestion and this custom of eating a few leaves with one’s meal was thought to promote well-being. The song however alludes to a different meaning. Parsley was thought to remove bitterness and although medieval herbalists recommended it for a sour stomach, it was also thought to remove bad or bitter emotions. The singer wants to cleanse the bitter air between himself and his lost love.

Sage (Salvia officinalis) was a symbol of strength and wisdom according to Celtic tradition and was even associated with immortality.Today, most of us only think of sage when we start to stuff the Thanksgiving turkey, but it was used medicinally long before it became a modern seasoning. Sage has drying properties and was used to treat chest congestion and its antiseptic compounds were used to bind wounds and treat snakebite. In the context of the song, it seems that the singer wants to offer strength and wisdom to his lady.

Rosemary (Rosmarinius officinalis) is also a modern culinary herb with ancient meanings beyond its seasoning properties. It is associated with love and fidelity, often used in Medieval times as part of a wedding bouquet or strewn on church floors during the nuptials. The strong scent lingers, so it was given as a token of remembrance between lovers. It is the singer’s wish that his lady remember him with love and affection, possibly pleading with her that he will remain faithful this time around.

Thyme (Thymus vulgaris) has a number of healing or medicinal properties and has been used for thousands of years to bind wounds and as an antiseptic. It wasalso a sign of love and courage and often a knight’s lady would embroider thyme leaves on his cloak or tunic. The Greeks believed that thyme could reverse sad or melancholy feelings and it was sometimes used to boost confidence in stressful situations. Our singer wants his lady to have courage and be happy because he will eventually return to her.

The song is trying hard to convince his lost lady love that if she will gather the strength and courage to see him again, to remember their happier times, he will eventually return to her. And although it was recorded as a modern pop song, the tune and lyrics, in several incarnations have been around since the Middle Ages. It is an interesting journey into the past, and now you know the ‘rest of the story’.